“…for his personal courage, self-sacrifice and perseverance in working for sustainable development in Chile.”

This Monday, the 2nd of November 2015, we, the Right Livelihood College the the University Austral de Chile, Valdivia, Chile, were happy to receive Juan Pablo Orrego. During two extensive sessions, one in the morning exclusive for the students and one open to the public in the afternoon, we learned about his life, his goals in life and about his important and influencing pro activism in Chile.

Juan Pablo Orrego, laureate in 1998,  was born in 1949, and has a Master in Environmental Studies (1986). At a younger age he was a composer and singer in a popular urban folklore group. In 1991 he helped to establish and was also elected to be general coordinator of the Grupo de Acción por el Biobío (GABB) to attempt to stop the construction of six dams in the Biobío River in southern Chile, one of South America’s most spectacular rivers and one of great ecological significance. Its watershed is also home to the Pehuenche indigenous people, numbering about 10,000.  In Chile the Biobío has become a symbol of the environmental and social struggle, which is still going on in the country. According to authorities and analysts the Biobío campaign has had a significant influence on the story of hydro development in Chile … for the better.

Today,  Juan Pablo Orrego is known for his ongoing activism with his ONG “Ecosistema” in Santiago, aimed at the protection of rivers and indigenous communities from hydro power plant schemes and their effects.

During a 3 hour session in the morning with 26 students from 7 countries and 3 Masters Programs (Urban and Regional Planning, Development on a human scale and ecological economics and Rural Development),  Juan Pablo Orrego allowed us a deep insight in his earlier life, his spirituality and his reasons and motivations that led him to be the activist he is  today.

In the afternoon, in a presentation open to the public, he talked about the current and recent situation in Chile regarding the politics of water, energy and indigenous right. He emphasized in the lessons we, as a community, have to take from the current estate of arts, the ecological crisis and the loss of empathy between humans, and between humans and nature. “I am sure, that we as a human community, can solve the ecological crisis if we work together. The problem is, that we have to start today, because I am not sure, how much time we have left!”

Thank you, Juan Pablo Orrego, for this amazing and insightful day!
The Right Livelihood College from Valdivia! 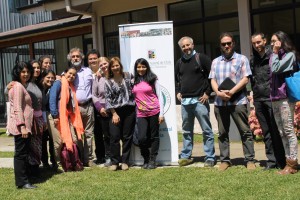 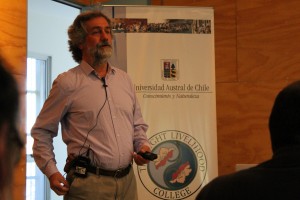 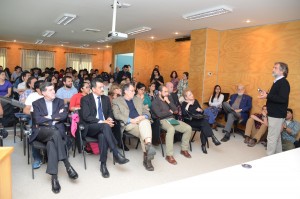