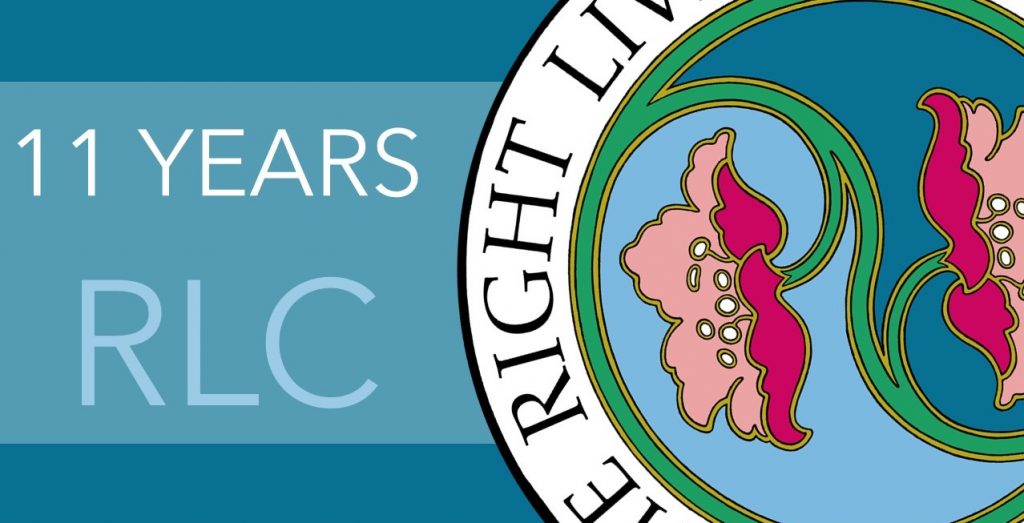 On Friday, January 8, 2021, the Right Livelihood College (RLC) celebrated its 11th Anniversary with a festive online ceremony. Right Livelihood Award Laureates Paul Walker and Raúl Montenegro, Chief Executive Officer of the Right Livelihood Foundation Ole von Uexküll, RLC Coordinators and many other partners and friends joined this joyous event, not only to congratulate the RLC on its birthday, but also to celebrate the beginning of a new phase in the history of the RLC.

Anwar Fazal, Right Livelihood Award Laureate of 1982, and founder and hitherto Director of the RLC Network, gave a moving speech about the past, present and future of the RLC, reflecting on what started as an idea to make a difference in the Right Livelihood way and has become a global network with 10 Campuses an Centres around the world: “It was an idea of Laureates to create a platform for them to advance the Right Livelihood way on issues of equity, peace and justice, to foster links between academia and activism and to nurture the youth for the future to create changemakers and thinkers.”

After 11 years of continuous growth and expansion, Fazal felt the need to convey these progresses to the organisational structure of the RLC asl well: “We are moving into a new governance structure which ensures greater participation, greater engagement and greater involvement of a variety of people, partners and networks.” He announced the establishment of the International Advisory Council (IAC) to replace the Steering Council as advising body to the RLC and declared his retirement as Director of the RLC. Instead, Fazal will take over a new role as co-chair of the IAC to continue his efforts for a just and peaceful world. The second structural change was the creation of the Coordinating Council involving the Campuses, Centres, and working groups that will operate in a participatory way with plans to meet every two months.

Monika Griefahn, Board Member of the Right Livelihood Foundation and the second co-chair of the IAC, who has worked with Fazal from the very beginning thanked l for his tireless energy to make an idea become reality. She stressed the importance of getting young people not to lose their hope to change something and that with experience on the one hand, but with the inspiration of and by the Right Livelihood Award Laureates things can be changed. Griefahn stated Fazal as the best example of this belief, recalling a small, but powerful sentence he once said to her: “Remember, little people doing little things in many places can change the world”.

Ole von Uexküll, CEO of the Right Livelihood Foundation also grasped the opportunity to thank Fazal for his inspirational work and explained that he had felt the disconnect between the reality of hugely important grass roots work and the scientific discourses at universities. But the RLC and the voices of Right Livelihood Award Laureates have been building bridges between those different realities, which is an important achievement.

In his closing words, Fazal thanked everyone for their kindness and wonderful work, and gave yet another important message to take along: “Never be afraid to say: ‘I CAN do something’, because you can, and you must!”